The coastline of West Cork has numerous beautiful islands, each somewhat of a treasure in their own right. Easily accessible from Skibbereen town, each of these islands have something fascinating to offer, and provide the opportunity to deviate from the more conventional tourist paths. From beautiful nature walks, to medieval ruins, to amazing art galleries, West Cork’s islands truly do have it all.

All of the islands are accessible via ferry, with the exception of Dursey Island (accessible via Ireland’s only cable car). For ferry times, please check online under the island name (these may be seasonal and/or subject to change). 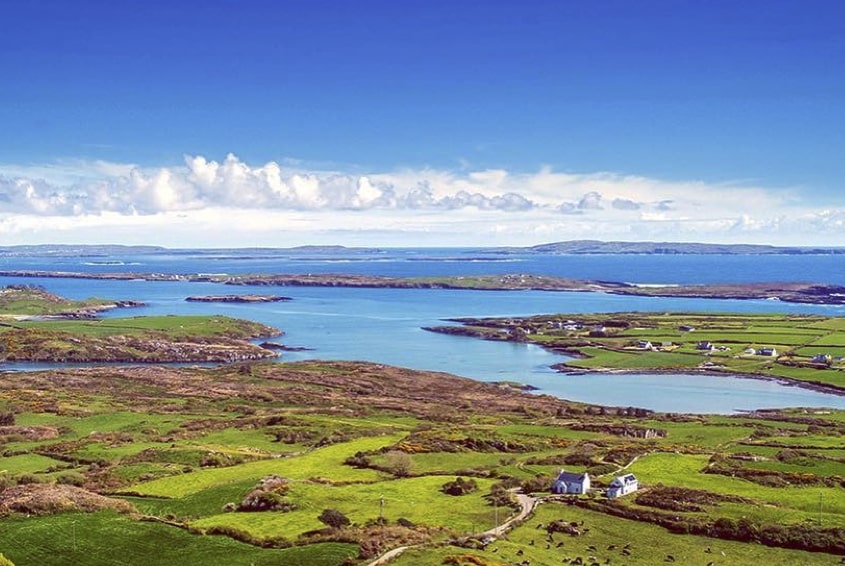 Located only ten minutes by boat from the shores of Schull, Long Island, at five km long to less than one km wide, is aptly named. With a permanent population of only ten people, Long Island is ideal for those who enjoy walking, bird-watching and sea angling. Long Island’s best attraction is perhaps White Tower Lighthouse on its eastern end, which marks the entrance to Schull Harbour. 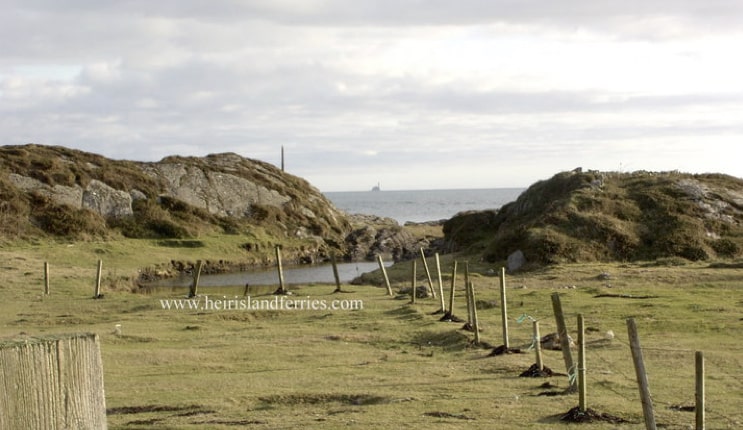 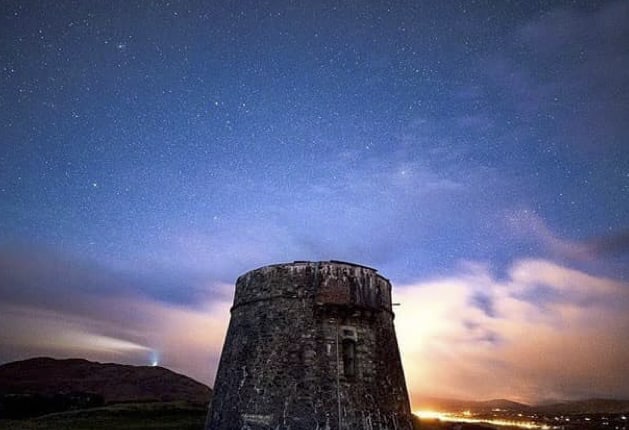 Located between Berehaven Harbour and Bantry Bay, Bere Island has historically been of massive strategic importance. As such, the island has several Martello Towers dating from the Napoleonic Wars, and gun batteries at Ardaragh and Lonehort (surrounded by the fortifications of Fort Berehaven). As a Treaty Port, Berehaven remained in British hands until 1938, used to guard Britain against attacks from the sea. With a current population of just above 200, Bere Island has been inhabited since the Bronze Age, and the Druid’s Altar wedge tomb can be seen on the island. Bere Island and its surrounding waters are also home to stunning wildlife, with the area known for the extensive bird and marine (killer whales, basking sharks, and dolphins can all be glimpsed on occasion) life. 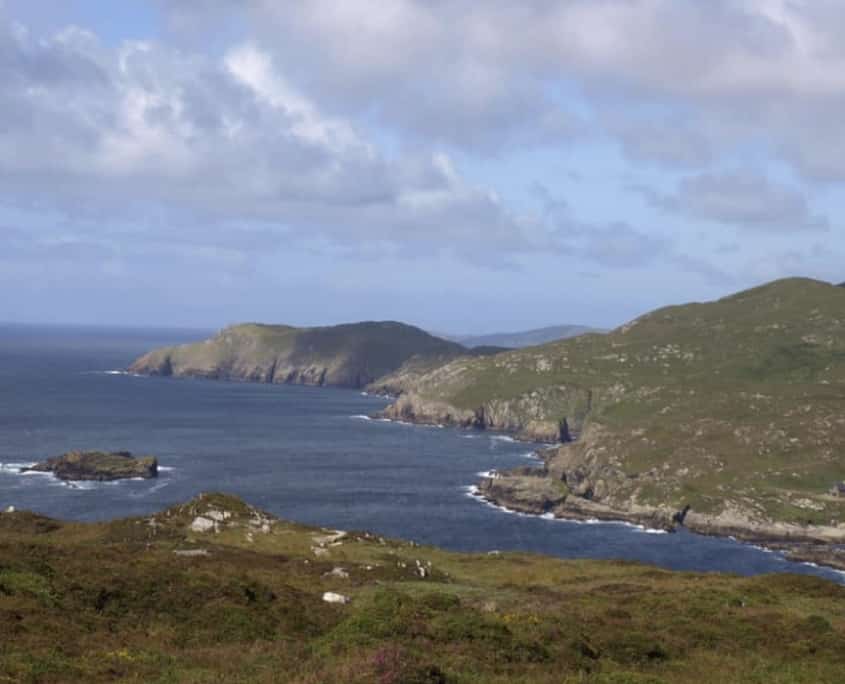 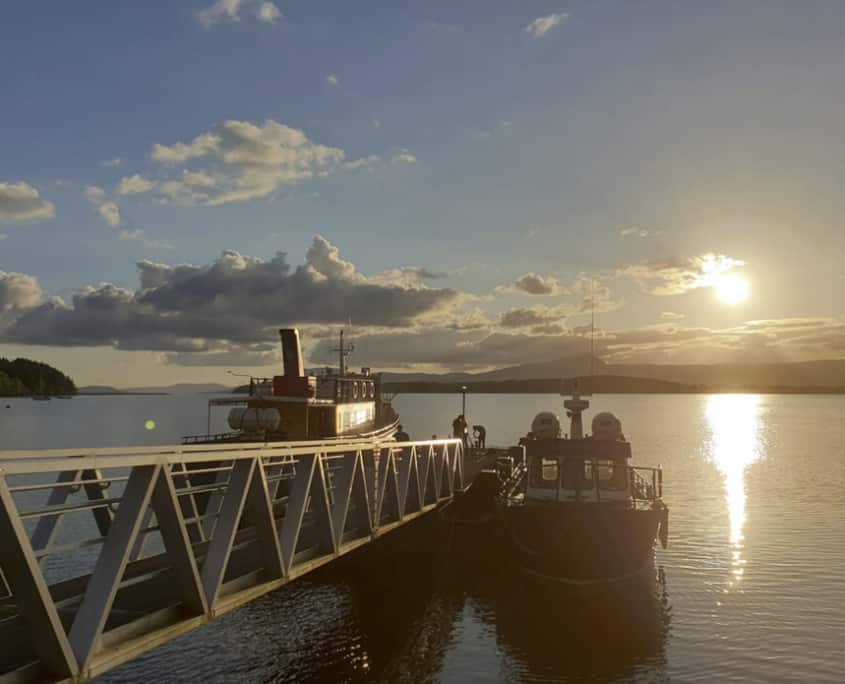 A short ferry ride from Bantry, Whiddy Island hosts such attractions as the 16th century Reenagig Castle of the O’Sullivan Bere, a fortified gun battery built by the British following the 1796 French Armada scare, and a sixth century ecclesiastical enclosure (church, holy well and graveyard) on the shores of the beautiful Kilmore lake. Whiddy Island is ideal for those who enjoy bird-watching, or just the odd ramble about in the peace and quiet (Whiddy Island has approximately twenty permanent residents). 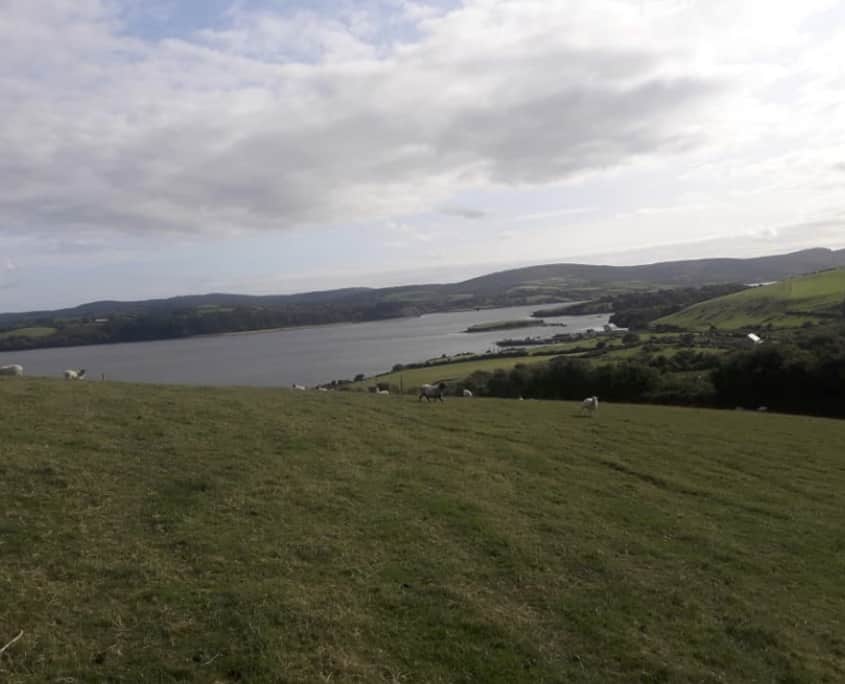 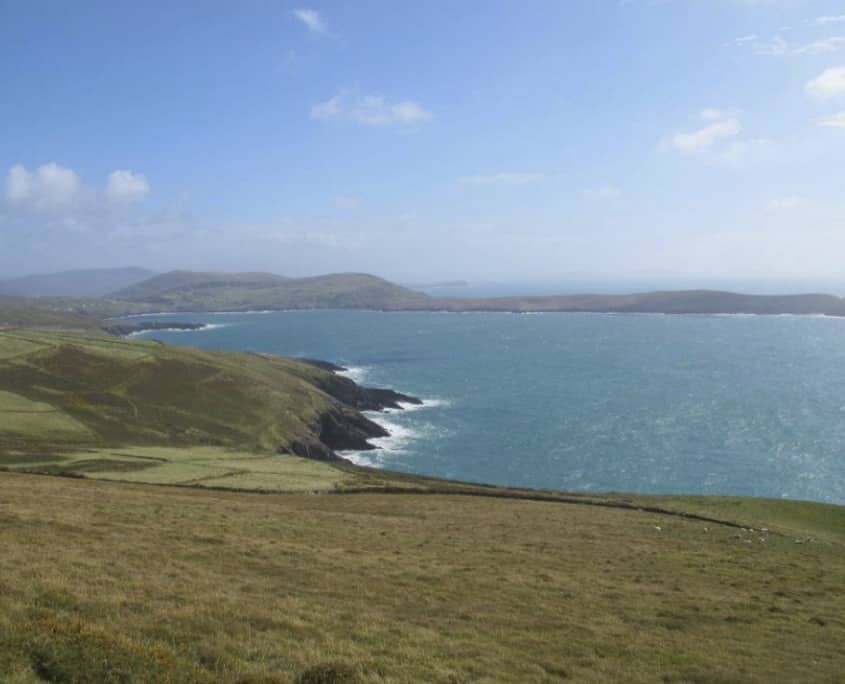 Accessible via a ten-minute journey across the Dursey Sound in Ireland’s only cable car, Dursey Island, Dursey is an oasis of calm for birdwatchers (rare birds from Siberia and America are often spotted there) and nature walkers alike, with a permanent population of under ten people, and no shops, pubs or restaurants. Notable sights on the island include the ruins of O’Sullivan Bere’s castle (sacked by the English in 1602), the ruins of the church of Kilmichael (built by monks from Skellig), and the two hundred-year old signal tower built as a defence against potential French attack by sea (with beautiful views of Mizen Head and the Skelligs). 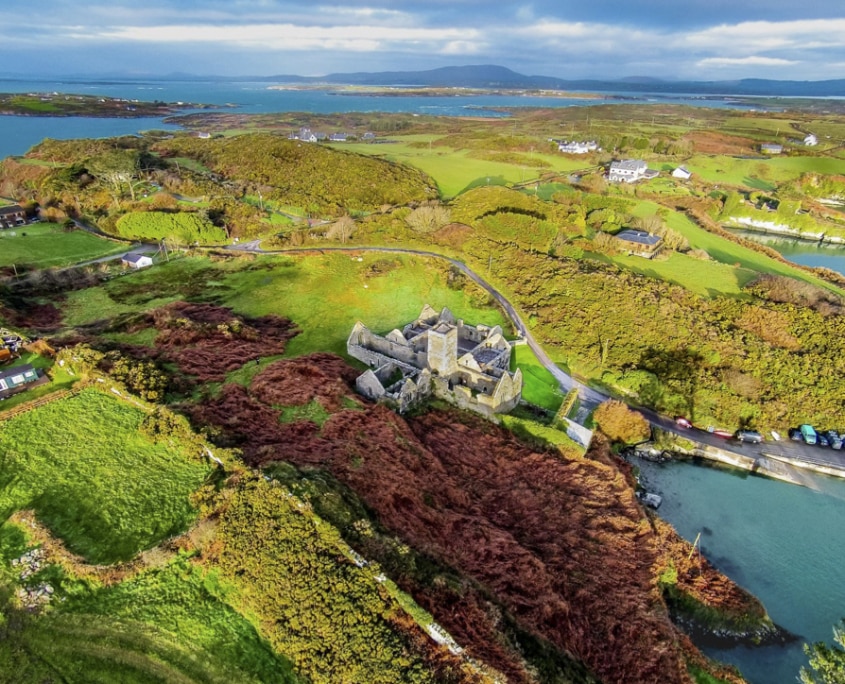 Located ten minutes from Baltimore by ferry, Sherkin Island is known for its community of artists, with numerous studios throughout the island as well as its own Fine Arts Degree course, and the annual Sherkin Island Regatta. Sherkin has a population of over one hundred people, several of whom are artists. The island is also home to some beautiful beaches, Cow and Silver Strands, both sandy beaches with beautiful views. Also to be found on Sherkin are the ruins of a fifteenth century Franciscan abbey, the old O’Driscoll castle, and the automated Barrack Point lighthouse (dating back to 1835).

A Gaeltacht island 13km off the coast with a bilingual population of about one hundred and thirty people, Cape Clear is also known as The Storytellers’ Island and puts on a Storytelling Festival each year (30th August to 1st September 2019). The island hosts Ireland’s only manned bird observatory, and whale- and dolphin-watching trips are also available around the island. Also worth a look are the old lighthouse and the nearby Fastnet Rock, and for those interested in history, megalithic standing stones, a twelfth-century ruined church and a fourteenth century castle can all be found on Cape Clear. 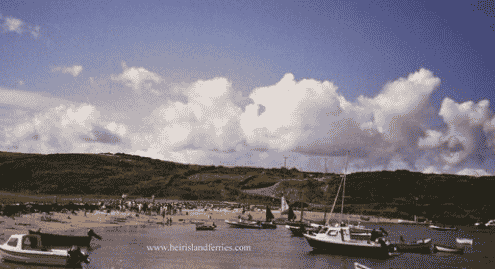 Also known as Inis Uí Drisceoil, this small island is home to twenty-five people, over two hundred different varieties of wildflowers, and the numerous majestic sea birds that make their homes in the cliffs. With ferry crossings every two hours, visitors to the island can enjoy the beautiful sandy beaches, cookery school, art gallery, and sailing school- plenty to keep anyone busy! Heir Island also has a lesser known international flair- the intrepid tourist can walk across the Paris bridge in the townland of Paris, all without leaving Ireland! 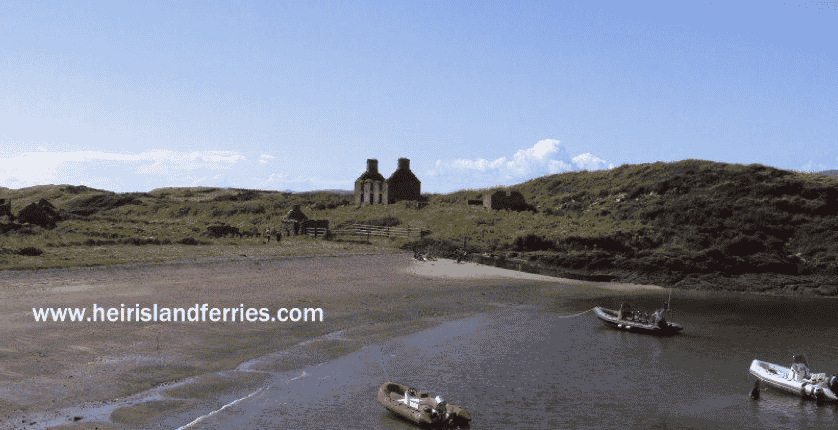 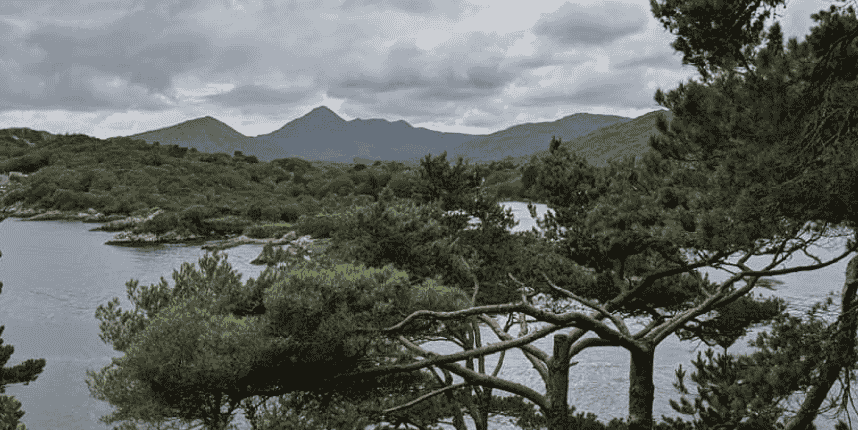 Located in Glengarriff Harbour in Bantry Bay, Garnish Island (also known as Ilnacullin) hosts beautiful and extensive gardens, made possible by the near-subtropical climate created by a combination of the Gulf Stream and the sheltered position of the island. These gardens are fully accessible to the public, along with a Martello Tower restored by the OPW (for the history enthusiasts). There is a small fee for entry to the island and all of its attractions. Garnish Island can be accessed by ferry from Glengarriff Pier, and seals are often seen on the picturesque journey to the island.

Skibbereen Area Beaches (Not To Miss)

Skibbereen’s Marvellous Megaliths
We use cookies to ensure that we give you the best experience on our website. If you don't want your cookies collected click No thank you.OkNo thank youRead more
Scroll to top