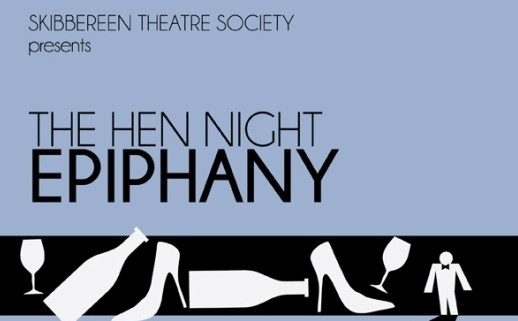 His previous hit plays include The Kings of the Kilburn High Road and Brothers of the Brush, both of which had all male casts. This is his first attempt at getting inside the female mind. As the play contains adult themes, it is not really suitable for children.

The Irish amateur premiere of The Hen Night Epiphany takes place this Friday night at Skibbereen Town Hall at 8pm. There will be further performances there on Sunday and Wednesday next, February 24th and 27th, and one more on Friday, March 1st, before they head off on the confined drama festival circuit. 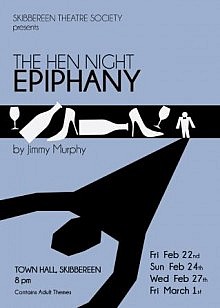 Director Fachtna O’Driscoll stated this week: ‘We are indebted to Jimmy Murphy for giving Skibbereen Theatre Society the honour of being the first amateur group to perform his new play.’

In The Hen Night Epiphany, Una (Breda Herlihy), her two best friends (played by Sarah Murphy and Mary O’Driscoll), her mother-in-law to be (Hilda Hegarty) and her fiance’s godmother (Carmel O’Driscoll) gather for a hen night of sorts at the run-down cottage the couple plan to renovate. The booze flows, the jokes and slagging begin, but all get more than they bargain for with revelation after shocking revelation!

Skibbereen retailers are in for a welcome surprise this Spring

St. Patrick’s Weekend in Skibbereen
We use cookies to ensure that we give you the best experience on our website. If you don't want your cookies collected click No thank you.OkNo thank youRead more
Scroll to top