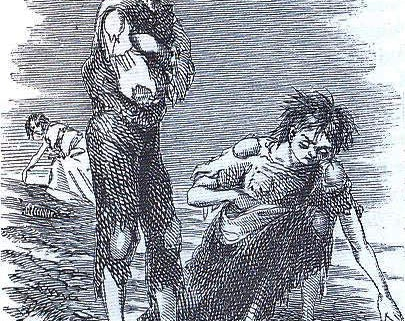 Famous at home and abroad, the song ‘Skibbereen’ (also variously known as ‘Revenge for Skibbereen’, or ‘Dear Old Skibbereen’, among others) is one of the most famous examples of traditional Irish songs about emigration (others include ‘Boys from the County Mayo’, ‘Fairytale of New York, and ‘Fields of Athenry’), notably featuring in Neil Jordan’s movie, ‘Michael Collins’.

The lyrics of the song (although there is no single definitive version) indicate that it was composed outside of Ireland, most likely in the United States. The song was most likely written by Skibbereen emigrant Patrick Carpenter, who wrote for publications in New York and Boston, and was first published in 1869 in Boston in a collection called ‘The Wearing of the Green Song Book’.

The song is a dialogue between a father and son about the father’s reasons for emigrating from his native Skibbereen. It covers the various calamities that affected the area and country in general- the Great Famine (Skibbereen was one of the most affected areas, with between 8’000 and 10’000 dead), evictions, and the 1848 Young Irelander Rebellion. The British are blamed for these disasters, and the song calls for revenge in the form of rising up to fight for Irish independence. The song ends with the son swearing to return to Ireland and take his revenge.

Although the song heavily features the Famine, it likely began as more of a Fenian anthem than a pure lament. The song is overtly political and openly militant, and was initially only truly popular in Irish-American nationalist circles. While the song became more popular in Ireland after the melody switched from that of ‘The Wearing of the Green’ to a slower and more melancholy tune, it remained very much a nationalist song.

St. Patrick’s Parish, Skibbereen
We use cookies to ensure that we give you the best experience on our website. If you don't want your cookies collected click No thank you.OkNo thank youRead more
Scroll to top