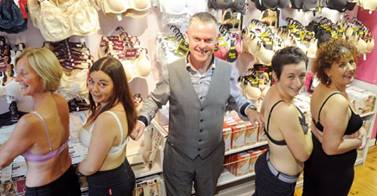 Sean Murray of Sean Murray Fashions has been practising for months to break the existing record to raise much needed funds for Get the Girls, the Irish Cancer Society’s breast cancer campaign throughout October. Each year more than 2,500 women are diagnosed with breast cancer. 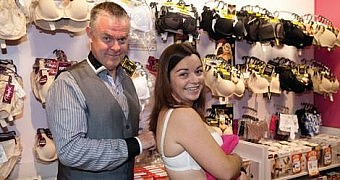 Sean Murrays which is home to West Cork’s largest lingerie department will add to the record attempt on Saturday 26th October by fitting more than 500 women for bras in eight hours while fitting another 500 men and women for jeans in eight hours to enter the record books on the treble.

The retailer will give the customer €2.50 discount from the sale of each bra sold throughout October and he will match this to give €2.50 to the Irish Cancer Society. He will also give a €5.00 donation to the charity for every pair of jeans sold for the month of October.

The record attempts come two years after Murray hosted Ireland’s first bra tug of war in aid of the Irish Cancer Society which raised thousands of euro for the charity.

Speaking of his impending record attempt Sean said, “Now that word is out, the pressure is on to break the record which will be tough but I am ready to give it a go. I have a few more weeks of practising and honing the technique but I am getting there. The guidelines are quite strict so we must adhere to certain criteria.

“We really want to do something different to raise awareness for the charity and although the events themselves will be fun they will raise money for a very serious cause that affects too many women in Ireland. We also hope to attract a mix of 500 women to be fitted for bras and 500 men to be fitted for jeans by our trained staff in our lingerie and denim departments on Saturday 26th.”

Eileen Kearney of The Irish Cancer Society added, “It is great to have businesses like Sean Murrays in Skibbereen get behind our Get the Girls campaign by doing something really different and fun.

“One exciting project that Get the Girls will help fund is the new Collaborative Cancer Research Centre – Breast-Predict, this new research project will deliver excellent research for the benefit of patients.

“We hope that everyone will lend their support to the cause throughout the month of October and get behind Sean’s record attempt and help raise vital funds for women all over Ireland who find themselves affected by breast cancer,” she said.

Health & Well Being Evening – 17th October
We use cookies to ensure that we give you the best experience on our website. If you don't want your cookies collected click No thank you.OkNo thank youRead more
Scroll to top